Modern Indian winemaking may still be in its infancy, but Shailendra Pai can already consider himself to be something of an industry veteran.  Having spent five years with Chateau Indage from 1986 to 1991, he was later instrumental in establishing Renaissance Wines.  Valonneé Vineyards is his latest venture, and everything from the name, the equipment, the grape varietals and even the winemaker is very much inspired by France. 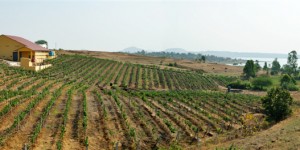 Their vineyards are located in the Nashik Valley at the northern end of the Deccan Plateau wine region.  This has become the de facto hub for current Indian winemaking and hosts a number of wineries including the industry-leader, Sula Vineyards.  Vallonné Vineyards has been able to secure gentle hillside land which is being farmed organically using drip irrigation.  With the Mukne Dam in the background this is a picturesque location and future plans include wine tourism.

Their first wines were released in late 2009 and The Wine Society of India rated their Merlot very highly in 2011.

Valonné Vineyards produce four wines specifically for the UK market under the brand name Anokhee, which were launched at the LIWF in 2012.